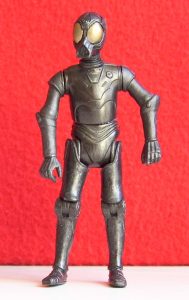 If you have paid attention to Hasbro and their Build a Droid figures, you have realized that they have a pattern.  There seems to be a process that uses each mold twice so that each droid has a match somewhere within the basic figure lint.  The 5D6-RA7 was the first version of the Death Star Droid line of Build a Droid and the MB-RA-7 was in the second of four waves.  The figure exceeded our expectations so we are hoping that it will become the template for all of the future Death Star droids.  It is the first Death Star Droid figure that we have seen that has had a good amount of joints that move.

The 5D6-RA7 originally started out as an exclusive figure in 1999, but was turned into a clearance item shortly after when The Power of the Force items became popular.  It was considered an awesome figure in its time but, 10 years later, the Build a Droid figure came onto the seen and rendered it outdated.  That decade of technology made improvements that were only dreamed about years before.  The 5D6-RA7 has a pretty good ten points of articulation, but it doesn’t come with wrists that move, which was quite a disappointment.  Also, the Droid has a center of gravity that is off a bit and will fall easily when trying to stand it up.  If you work with it enough, you can get it to stand, though, but it may be in an odd position.  The body itself has beautiful coloring and looks almost identical to the movie version.

It is uncertain whether or not Hasbro will use the Build a Droid sculpture in the future.  There are many other droids they could produce instead but, me personally, I would love to see the gold 3B6 come out next.  Kids and collectors both have received the Build a Droid pack well, so we have a hard time imagining a better premium.  All I know is that it is awesome to finally have some of the background droids we have been wanting to see for years.